Cannabis refers to a group of three plants with psychoactive properties, known as Cannabis sativa, Cannabis indica, and Cannabis ruderalis.

When the flowers of these plants are harvested and dried, you’re left with one of the most common drugs in the world. Some call it weed, some call it pot, and others call it marijuana.

As weed becomes legal in more areas, names for it are evolving. Today, more and more people are using the term cannabis to refer to weed. Some argue that it’s a more accurate name. Others feel it’s more neutral compared to terms like weed or pot, which some people still associate with its illegal use.

Cannabis is usually consumed for its relaxing and calming effects. In some U.S. states, it’s also prescribed to help with a range of medical conditions, including chronic pain, glaucoma, and poor appetite.

Keep in mind that while cannabis comes from a plant and is considered natural, it can still have strong effects, both positive and negative.

What are the components of Cannabis?

Cannabis is made up of more than 120 components, which are known as cannabinoids. Experts still aren’t sure what each cannabinoid does, but they have a pretty good understanding of two them, known as cannabidiol (CBD) and tetrahydrocannabinol (THC).

Each has its own effects and uses:

CBD. This is a non-psychoactive cannabinoid, meaning it won’t get you “high.” It’s often used to help reduce inflammation and ease pain. It also helps with nausea, migraines, seizures, and anxiety. Researchers are still trying to fully understand the effectiveness of its medical use.

THC. This is the main psychoactive compound in cannabis. THC is responsible for the “high” that most people associate with cannabis.

CBD vs. THC: What’s the Difference?

Both CBD and THC have the exact same molecular structure: 21 carbon atoms, 30 hydrogen atoms, and 2 oxygen atoms. A slight difference in how the atoms are arranged accounts for the differing impacts on your body.

Both CBD and THC are chemically similar to your body’s own endocannabinoids. This allows them to interact with your cannabinoid receptors. The interaction impacts the release of neurotransmitters in your brain. Neurotransmitters are chemicals responsible for relaying messages between cells and have roles in pain, immune function, stress, sleep, to name a few.

Despite their similar chemical structures, CBD and THC don’t have the same psychoactive effects. In fact, CBD is a nonpsychoactive compound. That means it doesn’t produce the “high” associated with THC.

THC binds with the cannabinoid 1 (CB1) receptors in the brain. It produces a high or sense of euphoria.
CBD binds very weakly, if at all, to CB1 receptors. In fact, it can interfere with the binding of THC and dampen the psychoactive effects.

CBD and THC have many of the same medical benefits. They can provide relief from several of the same conditions. However, CBD doesn’t cause the euphoric effects that occur with THC. Some people may prefer to use CBD because of the lack of this side effect.

CBD is used to help with other various conditions, such as: seizures, inflammation, pain, psychosis or mental disorders, inflammatory bowel disease, nausea, migraines, depression, and anxiety.

THC is used to help with conditions such as: pain, muscle spasticity, glaucoma, insomnia, low appetite, nausea, and anxiety. 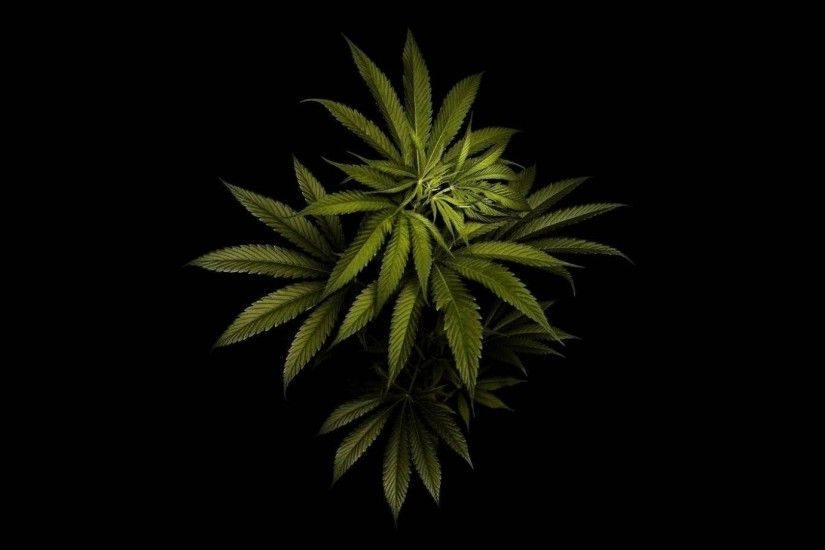 What’s the Difference Between Indica and Sativa?

The general perception is that sativa strains give mainly a cerebral head high, while indica strains primarily provide a body high. The literal difference between the two is in terms of classification – Cannabis sativa and Cannabis indica are two of the subspecies of the genus Cannabis.

Cannabis sativa is indigenous to hotter climates closer to the equator in areas like East Asia, while Cannabis indica is more indigenous to areas with colder climates. These differences in climates give the strains their distinct appearance, but do they result in a contrasting high?

Despite popular belief, the effects cannabis gives you are likely more accurately attributable to cannabinoids and terpenes, compounds found in the cannabis plant, as opposed to the strains. And while some cannabinoids and terpenes may be found more commonly in an “indica” or a “sativa,” none are found exclusively in one consistently enough to say an indica and a sativa will definitively cause specific effects.

Part of this is due to the crossbreeding of indica and sativa. These are generally known as “hybrids,” but the result is that even many strains that are indica and sativa have a hybrid nature to them. 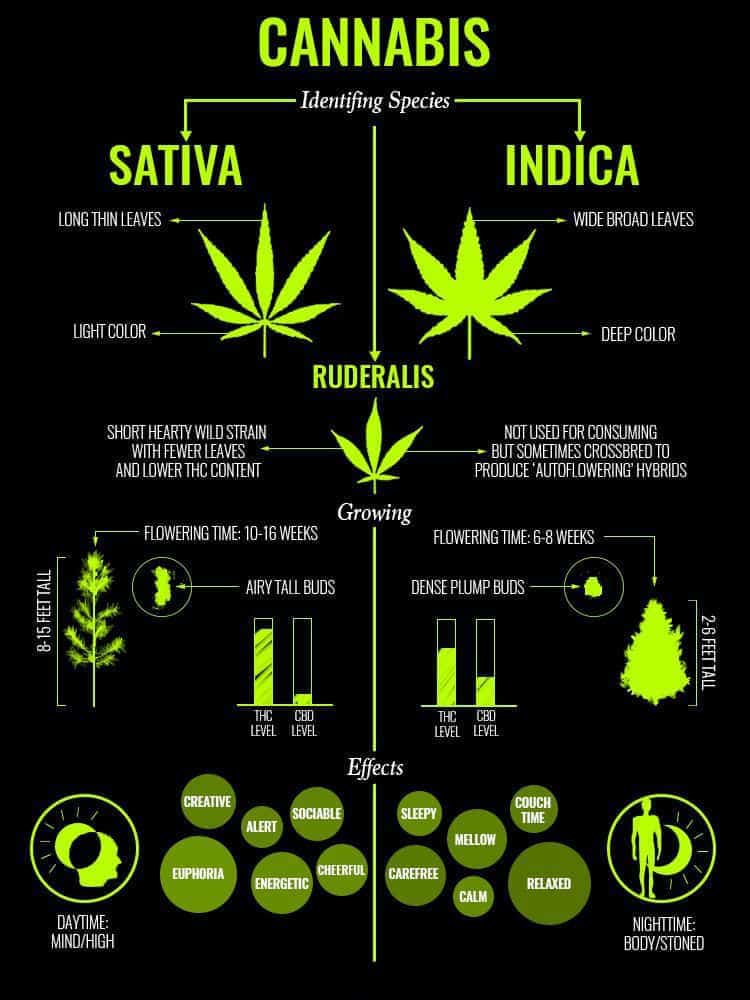 Understanding cannabinoids and terpenes are essential to understanding what cannabis does at all. Cannabinoids play a huge role in the effects of cannabis by interacting with the endocannabinoid system in the human body. There are hundreds of cannabinoids within a marijuana plant, but the two most widely known ones are THC and CBD. Tetrahydrocannabinol – THC – is known for having psychoactive effects, the high associated with marijuana. CBD, more formally referred to as cannabidiol, has many of the anti-anxiety and pain relief effects that have furthered support for medical marijuana.

Terpenes, on the other hand, are more known for giving marijuana a variety of distinctive aromas. Some terpenes give off a floral scent, others a fruity and citrus-y aroma, and others still a pine smell (fittingly, as terpenes can also be found in other plants and fruits). These terpenes do a lot to determine what strain of marijuana you’re dealing with, but in the admittedly little research that exists, they may also play a role in the effects of cannabis just as cannabinoids do.

But again, the effects these terpenes can provide, while consistent with the assumptions of what an indica or sativa does, that effect is no guarantee of one or the other.

Indica cannabis strains tend to be shorter and bushy in stature. Their leaves are fat and dark green coloured, which is due to the higher amount of chlorophyll. Indicas produce heavy and fragrant buds, with a yield that is usually higher than that of a sativa. They also tend to have a shorter flowering period than sativas, which is why they are often preferred for indoors cultivation.

The lore of indica is that it is supposed to be ideal for night-time use. Indica is sold as having similar effects to a sedative, good for relaxation or trying to sleep. That effect on the body can also be of great help for pain relief and the relaxation element means it is often recommended for anxiety, important parts of the medical marijuana push.

What is it about certain strains of cannabis that can cause these reactions? The terpene myrcene, in addition to bringing an earthy aroma, may have sedating effects, according to a 2011 study. Another terpene that is common in strains that are advertised as an indica is linalool, which in addition to sedating is said to help relieve anxiety. These may be found more often in marijuana advertised as indica, but as more crossbreeding leads to hybrids, they can potentially be found in some sativa strains as well.

Indicas are very effective for overall pain relief and is often used to treat insomnia for many people. Indica buds are most commonly smoked by medical marijuana patients in the late evening or even right before bed due to how sleepy and tired you become when high from an indica strain of marijuana. The most popular Indica strains currently include Kush, Northern Lights and White Widow.

Sativa plants are far more indigenous to warmer climates with longer summers, and take a longer time to fully flower than an indica. The plant grows far taller than an indica plant, and the leaves much thinner than indica leaves. That height can make it difficult for sativa to be grown indoors.

Sativa strains tend to grow tall, often towering anywhere between 1 – 3 meters, and sometimes up to 5m when grown outdoors. Sativa strains tend to be long and thin, but can also grow quite into a bush when left untrimmed. Due to the longer to flowering period, they are suited well for outdoors growing.

Sativa cannabis strains are associated with a feeling of rising or being uplifted in the head and mind. Creativity may begin to flow to the extent that you suddenly realise you have been staring into space as idea after idea goes through your mind, and concepts which previously seemed to have no connection join together to create new inspiration. There are numerous anecdotal reports, and even some science, on the tendency of cannabis to enhance pattern recognition. There are no studies on whether sativas produce this effect more than indicas, but this may well be the case. Many artists take advantage of the creative powers of cannabis sativa (marijuana) to create paintings. The most popular sativa strains include Purple Haze and Mauwie Wauwie.

Additonal benefits of Sativa include: feelings of well-being and at-ease, up-lifting and cerebral thoughts, stimulates and energizes, Increases focus and creativity, and fights depression.

On a chemical level, indica and sativa strains are different in their composition of the cannabinoid content, as well as in the balance of other phytochemical compounds, such as terpenes and flavonoids. Sativa strains usually show a high THC content and low CBD content, whilst landrace indica strains tend have a lower THC content, and a somewhat higher CBD content. But thanks to breeding, both indica and sativa strains can be found with varying THC: CBD cannabinoid concentrations.

In general, the effect of sativa strains is often described as a strong and uplifting head high, while indicas tend to produce a more body-centred, stoned effect. While the THC and CBD play a significant role in shaping the effect, other naturally occurring substances also play their part in producing these distinct characteristics. For example, over 120 different terpenes have been found in cannabis, the concentration and balance of which can largely influence the high produced by a particular strain.

After THC, CBD is the second most prevalent and important cannabinoid naturally found in cannabis; and not only is it thought to be medicinally valuable, but it also modifies the way THC interacts with the body, modulating and dampening the effect of THC. Generally speaking, based on the natural variations in plant chemistry, a rule of thumb is that sativa works on the mind, and indica on the body.

Many popular strains of cannabis are hybrids of indica and sativa; even ones considered an indica or sativa are likely to be a hybrid of some sort. Hybrids can have various combinations of terpenes and effects, but because indica and sativa are no longer the definitive terms they used to be for strains, the hybrid term is more accurately used with regards to how it is cultivated and grown. How a hybrid grows, how much it can yield, and what the plant will look like will vary based on which plants you are crossbreeding.

There is no generalised list of medical traits for hybrid cannabis strains, as they can literally be bred to encompass a wide range of actions, which vary from strain to strain. However, generally speaking, most medical users will want to find they benefit most from a CBD rich sativa or indica dominant strain.