What are Cannabis Concentrates?

Concentrates are packed with several times more cannabinoids than “plain” dried flowers and their potency can reach up to 90%, which is why many people have a bad experience when they first try them.
When consumed carefully and in moderation, concentrates can be safely used by both medical and recreational users.

For example, most flowers contain around 15-25% of THC, while most concentrates have up to 80-90% of THC. Concentrates can be found in many cannabis products, from edibles to oils and tinctures. They can also be consumed in their purest form by using additional equipment such as dab rigs and vaporizers. Since they are so potent, the high you get from concentrates is almost instant and last for about 1-3 hours.

How to Consume Cannabis Concentrates?

While there are numerous ways to enjoy cannabis concentrates, you won’t be able to use it in a joint or a vaporizer if the substance is hard to handle. Some people like to sprinkle the concenrate on top of the weed in a joint for an extra kick, while others like to use gravity bongs or vaporizers.

Dabbing is the most popular way to consume cannabis concentrates today. So much in fact, the concentrates are sometimes referred to as ‘a dab.’ It involves the use of special equipment (a dab rig) which separates it from a bong.

The nail can be made of glass, ceramic, titanium or other materials, and is heated using a specialized blowtorch. You add a dab of the wax to the hot nail surface, and it vaporizes immediately. Then, you inhale the vapor as you would with a traditional bong. The dome is a spherical glass piece you place over the nail to contain the vaporized weed.

Shatter typically looks like honey with varying degrees of transparency and color profiles or glass that has been “shattered”.  When this type of concentrate is warm, it has a consistency actually quite similar to very thick honey. When it’s cold, its consistency is more similar to glass. It shatters just like glass does if it is dropped or tapped, hence the term “shatter”.

While cannabis concentrates vary in texture and consistency, most undergo the same basic process to be made. First, the cannabis buds are taken and a solvent (usually butane, CO2, or propane) is run through them to extract all of the necessary chemicals from the plant. The solvent is then evaporated from the compound and you are left with the plant’s resins- the psychoactive chemicals in marijuana.

Arguably the most well-known type of dabbable concentrate, wax is made by blasting plant material with a solvent using a closed-loop extraction system. The resulting slurry is heated at low temperatures and whipped vigorously to remove all residual solvent. Because the product is whipped by hand, it gains airy peaks that are similar to whipped topping. Wax is generally drier and more crumbly than its counterpart budder.

The finished product resembles a “whipped” consistency and ranges from a variety of amber shades complete with a milder aroma and flavor profile. Budder is essentially wax with higher moisture content. The consistency of budder is oily and malleable, while wax is crumbly and more solid. Budder contains a higher moisture content because it is whipped less than wax. Remember, many hydrocarbon extractions are similar in nature, but it is the finishing techniques that determine the appearance and consistency of the final product. 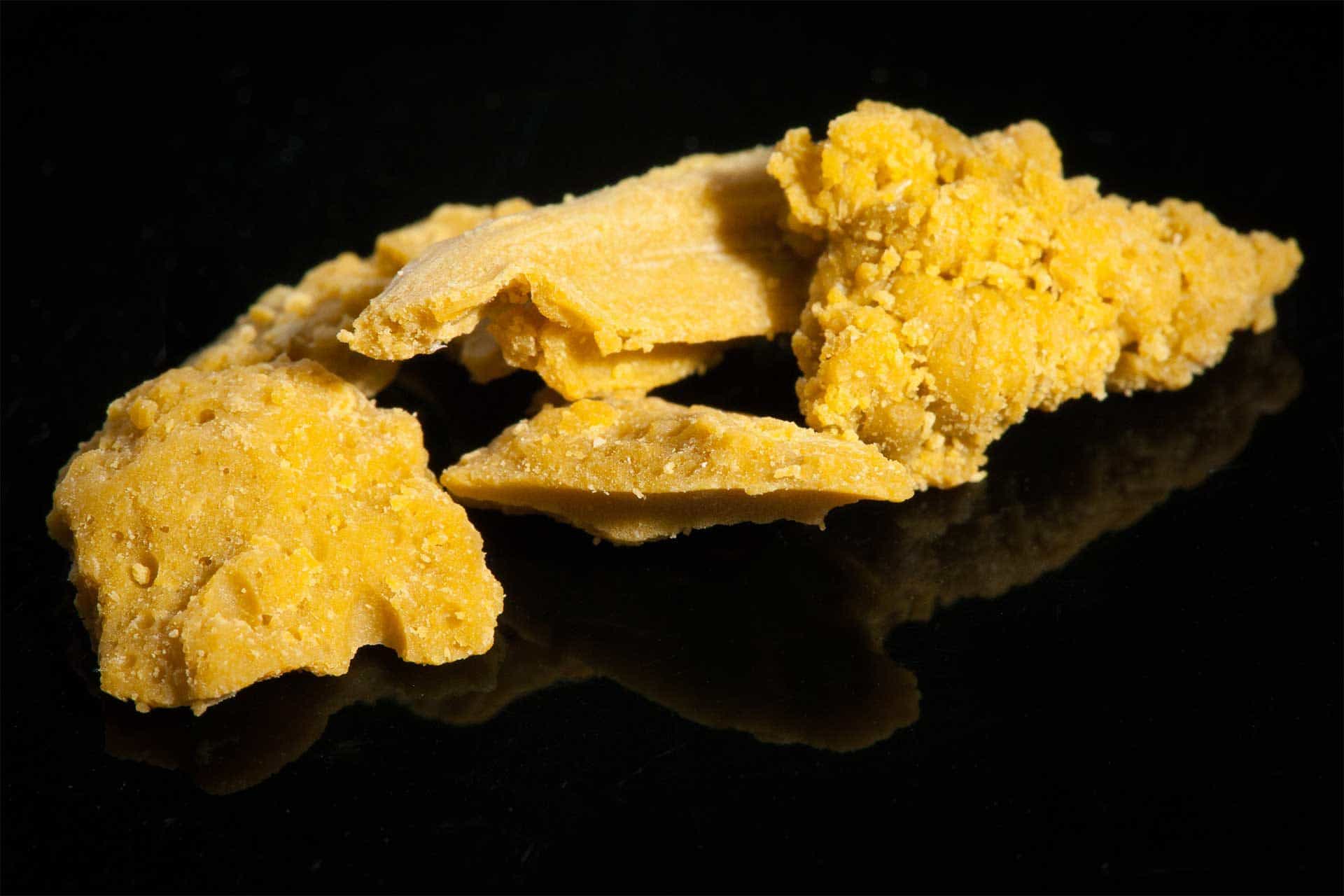 Whether you prefer vaporizer pens, salves, infused edibles, or elixirs, chances are that you have sampled a product that was produced using carbon dioxide (CO2) supercritical fluid extraction technology.

CO2 oil, is a “clean” product created by way of the supercritical fluid extraction method. It is used in the production of vaping fluids and is favored because of its ability to retain a high amount of terpenes and cannabinoids. It is preferable to the previously method of extraction that used butane or other petroleum products, so that the end consumer does not have to inhale those potentially harmful substances.

CO2 Oil made with proper technique should be a clear light amber colored oil. The potency of CO2 Oil typically ranges from 50% to 80%, with cannabinoid profiles representative of the cannabis material being used. Many consumers prefer CO2 oil because carbon dioxide is non toxic. 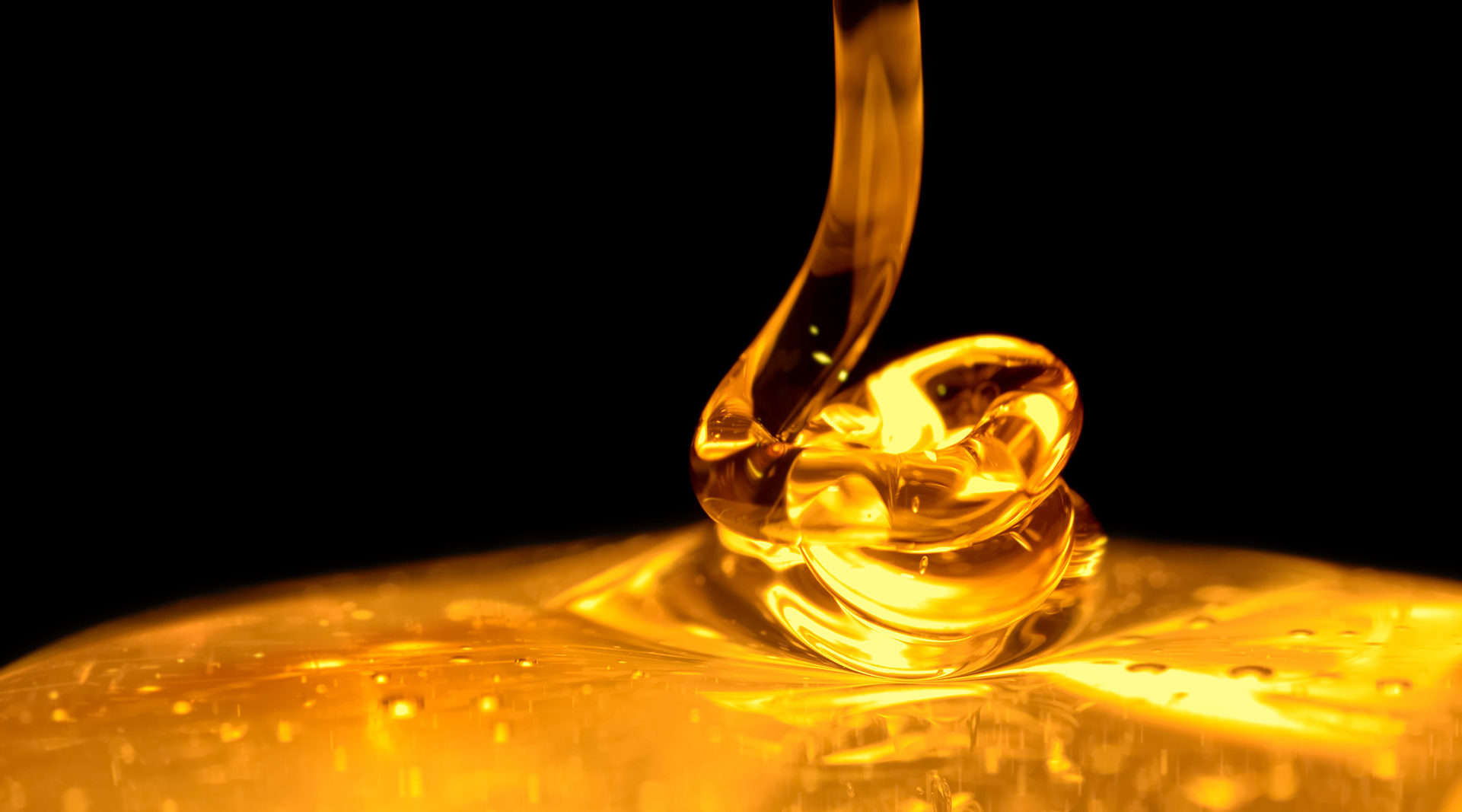 Rosin is basically solventless shatter. It’s made by pressing cannabis flower, kief, or trim between two very hot surfaces with a lot of pressure, basically squeezing resinous sap from the bud. The result is an extract with a sappy texture and translucent color. If rosin is made correctly, it will retain most of the flavor, aroma, and terpenes of the original bud, making it superior to solvent extracts which run the risk of containing butane, propane, or alcohol.

All of these extracts can be consumed the same way – in a “dab.” Therefore, dabs are neither solvent or solventless extracts, but the way you smoke them. Dabs are typically vaporized using a dab rig, which consists of a water pipe with a “nail” attachment instead of a “bowl” to put flower into. The nail is heated using a blow torch, then consumers place a chunk or “dab” of extract onto the hot surface. The extract vaporizes quickly on the hot nail while the user inhales. The vapor gets filtered through the water of the bong, giving a nice smooth hit of strong cannabis concentrate. 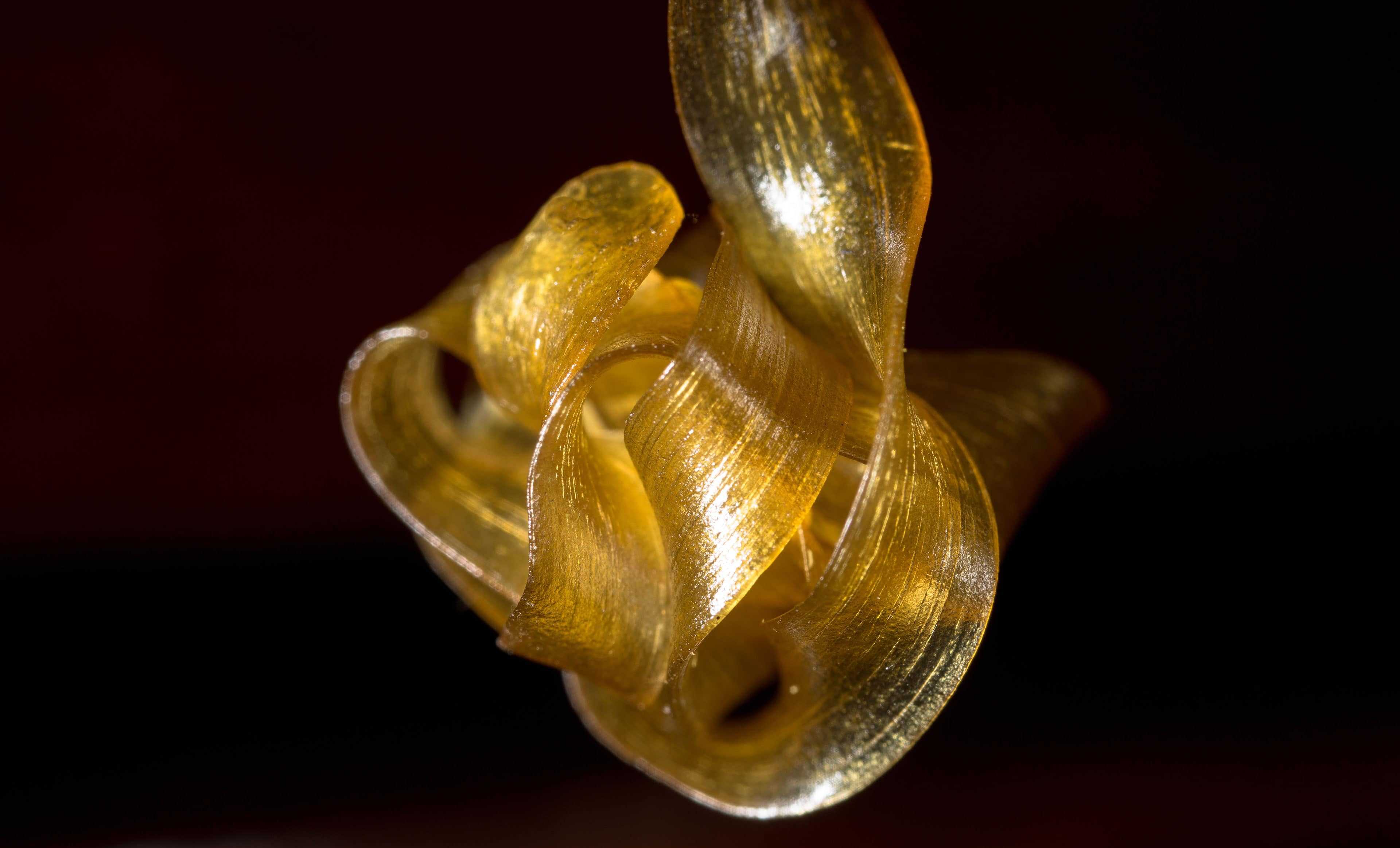 Thousands of years ago, before cannabis concentrates like BHO or live resin, there was kief. Also known as dry hash or dry sieve and sometimes spelled as “keef” and “kif,” kief is basically just a collection of trichomes — the sticky, often shimmery, sugar-like crystals — from the flowers and leaves of cannabis. The trichomes are the small resin factories that produce both cannabinoids and terpenes. Like hash, kief is one of the most organic, low-tech method by which the essence of the cannabis plant can be captured.

Kief, which means “pleasure” or “intoxication” in Arabic and was, according to legend, attributed to this primitive cannabis extraction by the Moroccans, is traditionally lightly pressed into cakes or bricks for storage or distribution. However, unlike hash, kief isn’t fully pressed and rolled to the point of rupturing the trichomes.

Most concentrate connoisseurs who value the quality and potency of their kief will store powder unpressed, in a sealed jar or bottle (to prevent oxidation), disturbing the delicate powdery substance as little as possible until smoked or vaped. Some dispensaries produce slim bricks of pressed kief that resemble a candy bar, such as one in San Francisco, pictured below. This could arguably be labeled hash because of its form and texture. Technically, there’s a fine line between kief and hash. 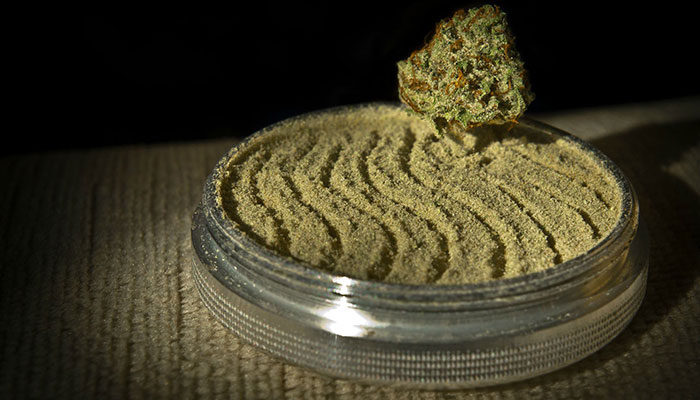 Crumble is a form of BHO (butane hash oil) which is purged for a long time at low temperatures in a vacuum oven, and whipped during the purging period. This gives it a softer consistency, yet allows it to remain brittle enough to crumble in your hand. Like other cannabis concentrates, crumble is much more potent than flower, kief or hash.

Essential oil extracted from these materials is highly concentrated and contains very high amounts of THC. Non-transparent extracts like crumble (which can be seen as a form of wax) are whipped during manufacture which causes the solids, such as THCA, to separate from the liquid elements like terpenes.

Live resin is a type of butane hash oil that is extracted from fresh cannabis plants frozen immediately after harvest. Cannabis plants that are still fresh contain a different collection of terpenes than traditionally dried cannabis.
This freezing of fresh plant matter results in more water content than is typical of concentrates made from dried and cured cannabis plants. Butane is water soluble above certain temperatures. To prevent contamination, live resin is extracted at very low temperatures. Extractions of fresh, frozen plant matter must be made between -20 and -50 degrees Fahrenheit to prevent toxins from the Butane polluting the extract as the frozen cannabis plant is washed in the solvent.

The final step is vacuum drying of the extract to remove the remaining butane and other impurities. Keeping the extract in a vacuum chamber allows the temperature to remain lower during this boil-off process.

The cold, fresh extraction process produces an extract that contains more terpenes overall and far more of the lightweight and volatile monoterpenes like Myrcene and Terpinolene that would be otherwise lost by normal, high-temperature drying and curing processes.

Cannabis isolate is the purest form of cannabis you can get. They come in either THC isolate or CBD isolate, which basically provides you with the pure molecule of each and nothing else. These products can be consumed via cooking, dabbing, infusing, vaporization, and more. If you have skin conditions, you can benefit from CBD’s anti-inflammatory properties by rubbing it directly on your skin. And because these products have already been decarboxylated, which means that its THC or CBD content is already active, once ingested you get all the best medicinal benefits of the molecule. In fact, you can even combine them by using a CBD isolate before smoking a bowl packed with a high THC strain to enjoy the entourage effect of cannabis.

THC isolates have the ability to get you very high, but it also has terrific medicinal benefits. Because of its purity and potency, (90-99%) THC isolates can be used to treat pain, cancer, insomnia, stress, and many more. On the other hand, CBD isolate is beneficial for its anti-anxiety, anti-inflammatory, and anti-cancer properties. It can also be used as part of your daily regimen to prevent neurodegenerative diseases, while its antioxidant benefits can help fight the signs of aging on your skin. Plus, CBD isolates won’t get you high, so you don’t have to worry about the psychoactive effects of this medication. 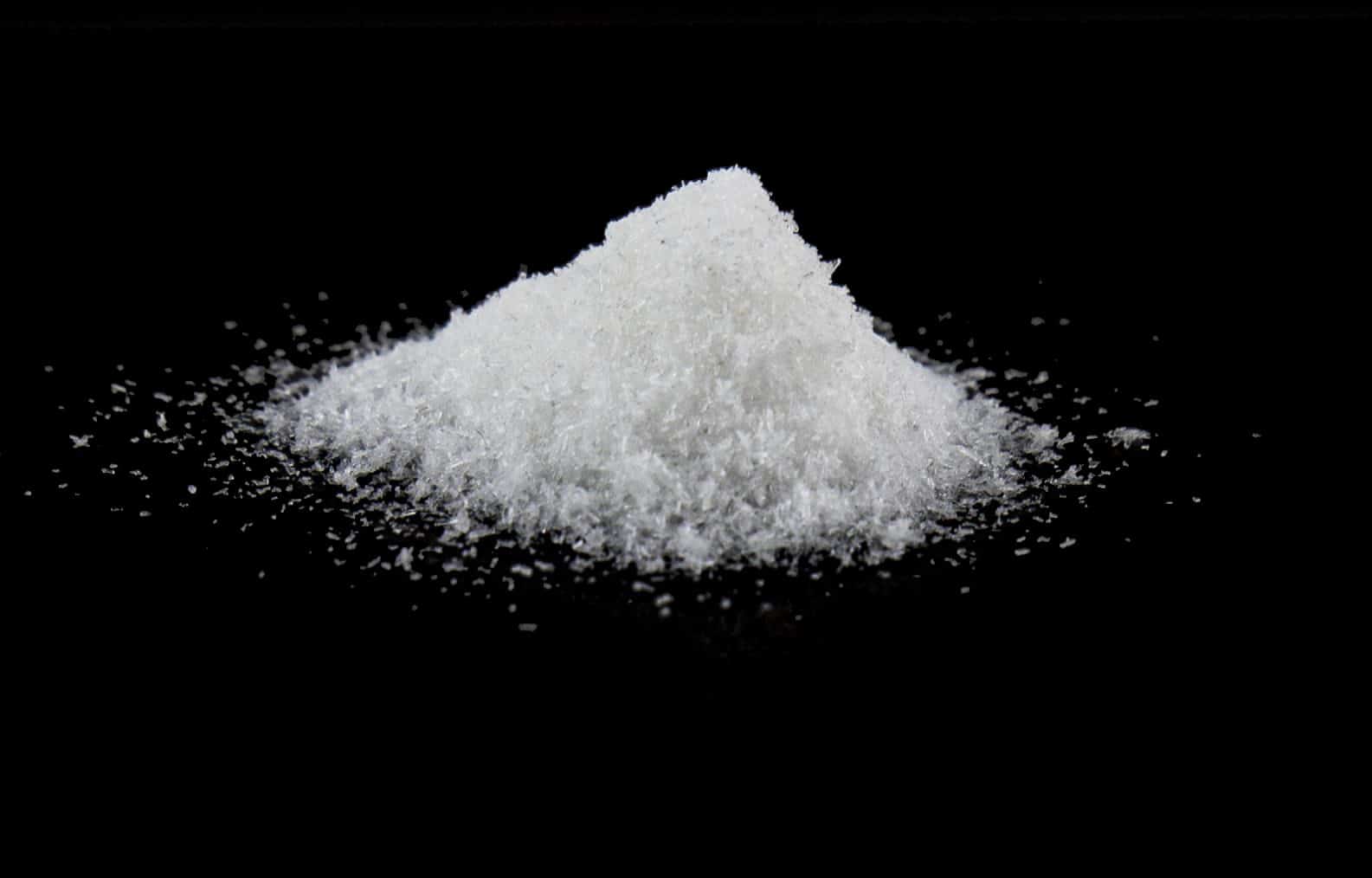 Hashish, hash for short, is derived from the “kief,” or the dried resin, of the flowering tops of mature and unpollinated female cannabis plants. The resin glands are called trichomes or crystals. Hash is harvested by collecting the powdery resin either by hand, by mechanical beating of the plants, or by submersing cannabis plants in icy water and then using small sieves to remove the trichomes, which are then dried (this type of hashish is called “bubble hash”). The remaining kief is typically pressed into “cakes,” or blocks, which are then smoked in pipes, vaporized and inhaled, or mixed with marijuana in joints.

Hash can be soft and pliable or stiff and brittle. It may be red, black, brown, green, yellow, or blonde in color. Hash may also be used in cooking, as it is soluble in things like oils, butter, or cream and can therefore be made into foods like brownies. Hashish may also be further manufactured, and the resin extracted and made into hash oil, a gooey substance that individuals are “dabbing” and smoking with e-cigarettes.

Today, there are many forms hash can take, and while the process of creating hashish has evolved significantly, the desired active ingredient has remained the same. These oils and hash itself are both made to contain high amounts of active marijuana ingredient, yet there is a difference in appearance and how they’re extracted. Although commonly encompassed as another nickname for cannabis, hash is very rich in history, and should be distinguished from more recent forms. 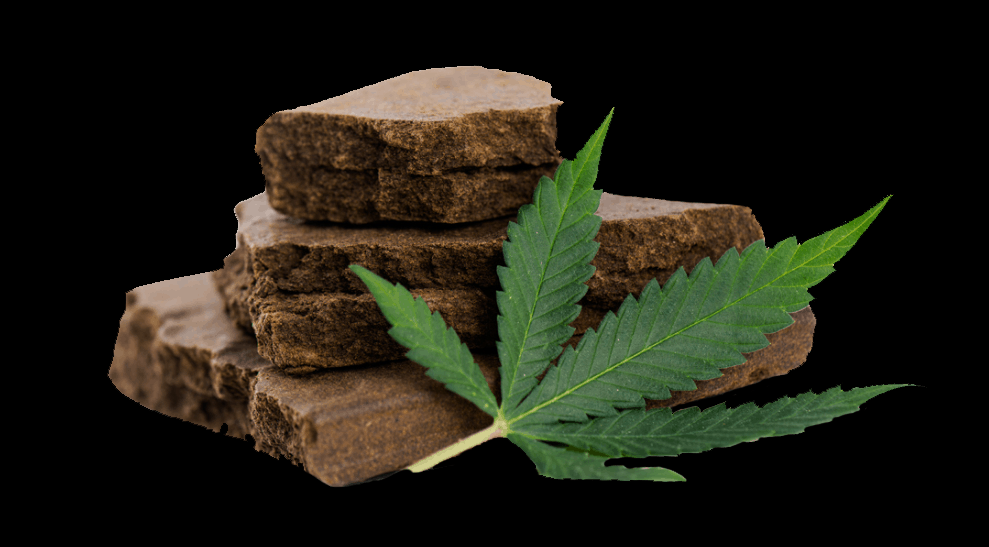